Where is the happiest place to live 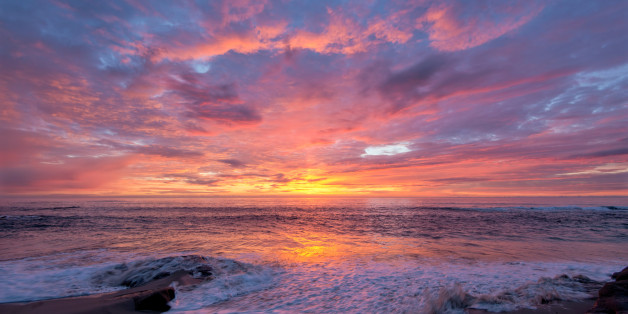 For as long as I can remember I’ve been going on holiday to Galloway.  It’s in the south west corner of Scotland – a part of the country that’s often ignored as people power up the motorway to Glasgow or Edinburgh and beyond.  My earliest memories are of staying in my grandparents’ stationary caravan – its bizarre self-composting loo that you had to climb up and sit on like a throne, and its garish swirling ’70s wallpaper. I remember lying in my bunkbed, whispering to my sister and listening to the adults’ low voices next door.  Later my parents bought a crumbling farmhouse nearby and the bunkbeds moved with them. The sea at dusk.  Photo taken from the cliffs on my most recent trip.

For a city kid, my holidays in Galloway were quite apart from the rest of my childhood.  They were times when I could roam free, create hideouts, climb trees, make up stories about fairies and return home for dinner when I heard the sound of a bell ringing.  The house is now in much better shape, nice wallpaper and double-glazing.  But the magic it holds for me is exactly the same.  I still feel a sense of freedom and belonging there that I don’t feel anywhere else.  I’ve heard the phrase “landscape of the heart” to mean the landscape that’s part of you.  For me it is a small corner of south west Scotland.

I was there over New Years Eve. The night before I left I walked down to the beach.  My eyes gradually became accustomed to the dark, and I looked up to see the stars above me.  As I walked back, I wondered for the millionth time whether I would be happier if I lived there.  I’ve never lived in the countryside, despite having moved around a lot when I was working for the Foreign Office.  I worry that I would feel isolated if I was there all the time, and that moving is a romantic dream rather than a practical option.  Plus there is my work and my boyfriend’s work.  London has one big advantage over the rest of the country, and that is the job market.

But practicalities aside, would I be happier if I moved to Galloway? Is it something I should aim for in the long-term?  Of course…I decided to see if there was any data on it. Happily, the ONS have created an amazing tool which you allows you to compare different wellbeing levels in the country.  I figured I should check out how Galloway compares to Islington (where I’m from), and Chelsea (where I’m living).  I’ve stuck the charts of how they compare at the bottom of this blog, but the basic answer is, yes – Galloway is better than Islington on all measures, and better than Chelsea on most measures.  People in Galloway say they are happier, less anxious, feel their lives have more meaning and are more satisfied with their lives.

In fact Islington, the borough I’ve lived most of my life, is one of the unhappiest places in the entire country…so living in Chelsea is step up (though to be honest, it’s really not me). And the happiest place is the Outer Hebrides – though moving there seems a bit drastic.

One thing I noticed returning to London is the speed everything is done at here.  In Galloway, going to a shop seemed to be as much a way to socialise as to actually buy something. I’ll admit to finding this a bit tricky to adjust to, trying to find my inner zen while waiting 10 minutes to be served by someone engaged in long discussion about the best local butcher.  But I know from the happiness research that connection with others is crucial.  And it’s so easy to feel in too much of a rush to connect with others in the city.

Here are the charts for the following questions (all using ONS Annual Population Survey data).  People were asked to respond on a scale of 0 to 10, where 0 was “not at all” and 10 was “completely”.

Overall, how satisfied are you with your life nowadays? Overall, to what extent do you feel the things you do in your life are worthwhile? Overall, how happy did you feel yesterday? Overall, how anxious did you feel yesterday?