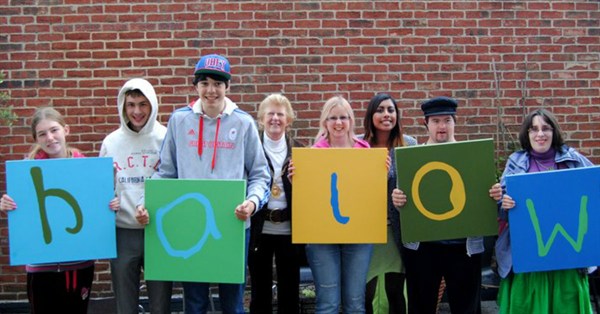 I just had an amazing experience running a workshop for young adults with learning disabilities.  I was slightly nervous about doing it.  So much of my energy has gone into explaining the intellectual side of happiness – what the research is saying, what scientists see in the brain functions etc.  I figured this crowd would need a much more hands-on experience rather than an esoteric discussion.

So I started off by asking the group what good things had happened over the weekend.  This is a great way to put yourself in a positive train of thought (even if you’ve had a terrible weekend!).  Two of the young men couldn’t come up with anything.  It made my heart ache.  I chatted to one of them who was sitting next to me.  We came up with three good things eventually, and he seemed to perk up at the evidence in front of him that his weekend hadn’t been all bad.  Then, not to be out-done, the other guy suddenly volunteered that he’d had a haircut which had made him feel “fresh”.

But the real surprise was still to come.  I led a three minute guided meditation, focusing attention on the breath. When I stopped, I looked round the room.  It was incredible the way the calm had come over all of us.  Haircut Man’s eyes were clear and bright.  He said he couldn’t describe the feeling, but a weight had gone from his shoulders.

I’d always assumed the people most in need of meditation and positive psychology were stressed out city executives.  But this experience renewed my faith in the power of these easy interventions to help all kinds of people, and reminded me that everybody suffers.  Having a learning disability and being aware of your dependence on your loved ones, aware of finding things difficult that others found easy, it must be hard not to get down.  They also brought up the suffering in the world – the unhappiness from the war in Syria and Iraq, and from parents not looking after their children.  I could see that they felt the pain out there and it weighed on them.

But there was one woman who seemed nothing but joyful – the “happiness mascot” of the group.  When we nominated her this she squealed with delight and clapped with glee.

As I got on the train back to gloomy rush-hour London I felt truly blessed to have had such a wonderful experience.  I will treasure it.  Thank you to the halow project for giving me the opportunity!